Minister of Infrastructure of Ukraine Vladislav Krykliy said that his ministry has prepared a new bill that will regulate the work of taxi services in Ukraine.

According to him, the new draft takes into account all the shortcomings of the legislation, due to which there is no proper control over the passenger transportation market. Anyone can get acquainted with the draft law and make comments and suggestions; this can be done on the official website of the ministry at the following link. 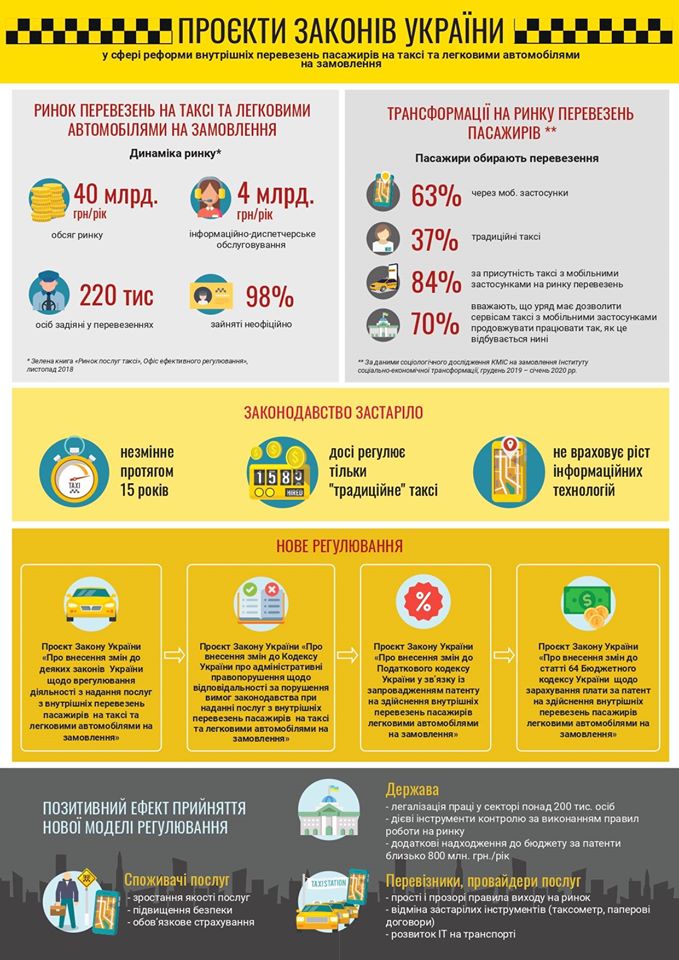 At the moment, there are many taxi services operating in our country. According to the latest estimates, the number of people who transport passengers by taxi reaches 220 thousand, which is 1.1% of the economically active population of the country. At the same time, the lion’s share of carriers provide services illegally, because they do not have a license or are not registered as business entities. According to some reports, the number of such taxi drivers reaches 98%.

The annual turnover of the market for domestic transportation by taxi and passenger cars to order is about 40 billion hryvnia per year. Accordingly, for the entire existence of taxi services, the budget of Ukraine has received huge amounts of less money. The new bill should correct this situation and bring passenger traffic out of the shadows.

In particular, the new bill provides for simple and transparent rules for entering the market: the abolition of licensing for domestic transportation of passengers by taxis and custom cars and replacing it with notification of the start of such activities. The ability to carry out activities in the field of passenger transportation on order based on a patent, which can be purchased for a period of one month or a year. Provision of taxes and fees from the conduct of such activities, their size is tentatively estimated at about 800 million UAH per year.

The bill also provides for ensuring traffic safety and liability of carriers to passengers, in particular, compulsory insurance of passengers is provided.

“I am convinced that the quality of services and safety will reach a new level if carriers become more responsible and operate in accordance with the law. Legalization of the taxi market and transportation in Ukraine is an effective step not only towards replenishing the state budget, developing the industry and creating new jobs, but also towards the European future, ”noted Vladislav Krykliy.

Recall that in May of this year, the Cabinet of Ministers of Ukraine officially allowed legal taxi cars (that is, those who have the appropriate license) to move along the public transport lane.

Source: Ministry of Infrastructure of Ukraine The President of Ukraine signed Law No. 786-IX on the functioning of an electronic cabinet and simplifying the work of a private entrepreneur, which cancels the obligatory income book